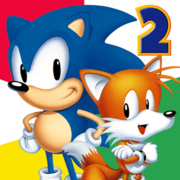 Sonic the Hedgehog 2 is a platform game developed and published by Sega for the Sega Genesis console, released worldwide in November 1992. It is the second main entry in the Sonic the Hedgehog series, and introduced Sonic’s sidekick, Miles “Tails” Prower, controllable by a second player. In the story, Sonic and Tails must stop series antagonist Dr. Ivo Robotnik from stealing the Chaos Emeralds to power his space station, the Death Egg.

Sonic the Hedgehog 2 sold over six million copies, making it the second-bestselling Genesis game behind the original Sonic the Hedgehog. Cited as one of the greatest video games of all time, it received acclaim from critics who commended the game’s level design, visuals and music, although its multiplayer mode was criticized. It has been rereleased on various platforms; a remastered version developed using the Retro Engine released on iOS and Android in December 2013. Two direct sequels, Sonic the Hedgehog 3 and Sonic & Knuckles, were released in 1994.

Gameplay:
Sonic the Hedgehog 2 is a 2D side-scrolling platform game The game stars Sonic the Hedgehog and his sidekick, Miles “Tails” Prower, who is described as having idolized Sonic as a child and wanting to keep up with him At the game’s start, the player can select to either play as Sonic, Tails, or both The difference between the two is purely cosmetic; the two both have identical abilities In the latter mode, players control Sonic while Tails runs along beside him A second player can join in at any time and control Tails separately The game takes place over a series of levels, each divided into one, two, or three acts with a boss fight with Robotnik at the end of the last act Certain levels have features that are unique to them; for example, Emerald Hill has corkscrew-like loops, and Chemical Plant has boost pads that instantly put Sonic at his top speed The character can jump on enemies to defeat them; the game also introduces a new move, the “spin dash” or “Super Dash Attack”, by which the player curls in a ball and spins while stationary, resulting in a speed boost When the player is attacked by an enemy without rings, is crushed, falls off-screen, or exceeds the act’s ten-minute limit, they lose a life and return to the most recently passed checkpoint Dying with zero lives gives the player a game over.

Sonic The Hedgehog 2 was developed by Sega Technical Institute.

Sonic the Hedgehog: The Dawn of a New Era

Vector the Crocodile in Sonic the Hedgehog