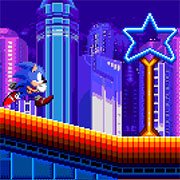 Sonic And The Mystic Gems

Sonic And The Mystic Gems (previously known as Sonic 1 Harder Levels) is a Sonic 1 fan-made-hack that began in 2005 with the simple purpose of being a generic Sonic 1 for Sega Genesis with increasing difficulty and revamped versions of the original levels. But now, it’s going to present a completely new gaming experience with a new style of level layouts full of paths everywhere among new enemies, new objects, new character abilities, new menus, completely different styles of the Sonic 1 special stages and much more!

This time, the Sonic 1 original zones gave place to new zones with unique art and a different pleasure to the eyes. The music is also being reformed to give a better ear-hearing experience, now less amateur and more like what a Sonic game must be.

Characters can glide, climb, fly, swim and homing attack everywhere but the same time these are their generic abilities, they work slightly different to make the levels more explorative and fun to play. Smashing blocks, smashing ceilings, smashing walls and smashing enemies is what will make you positively shocked with how the game has absolutely nothing to do with its predecessor “Sonic 1 Harder Levels”.

Gameplay now focuses in the new “characters alternation” gameplay methodology, so to proceed in the game you’ll need to know each behavior from each of the three characters available on it if you don’t want to be completely stuck or lost into the mazes of the game’s explorative sections.

Although the game is about to show a different gaming experience, it should be borne in mind that the current version is in an alpha prototype state and a lot will be modified until the next versions are released in the future.

Many objects, screens and cutscenes are currently under development and may have been cut from this demo; and that includes enemies, bosses, badniks, new mechanics and even stages. Currently only a total of 5 acts and special stages are available to play. The project is not being developed quickly, so be patient and understand that a lot will be improved over time. However, we at Harder Project are open to constructive suggestions and comments that will surely help us in the evolution of the project.