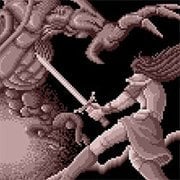 Phantasy Star 2 is a retro adventure rpg games. Phantasy Star 2 takes place 1,000 years after the events of its predecessor and follows the journey of a government agent named Rolf and his friends. They must investigate why the protector their planet Mota Mother Brain, is malfunctioning.

The series’ primary antagonist, Dark Force (known as “Dark Falz” in the first game), the embodiment of evil, returns as one of the main enemies the player must defeat. Mother Brain, a computer system built to control and maintain the Algo Star System, has begun to malfunction, and the main character, Rolf, must determine why. Another character, Lutz, also makes an appearance in the middle of the game.

Star Wars: Flight of the Falcon