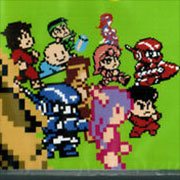 A sequel to Konami Wai Wai World, released only in Japan by Konami.