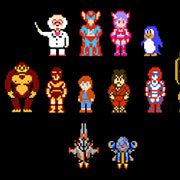 Konami Wai Wai World is an action game for the Nintendo Entertainment System. The game is a mashup of Konami game franchises and characters.

The main characters, Konami Man and Konami Lady, are original characters for the game, but makes special appearances in other Konami games. Characters included as playable characters are Goemon from the Goemon series, Simon from the Castlevania series, Moai from the Gradius series (not to be confused with Moai-kun where that game was released 2 years after this game), Fuuma from Getsu Fuuma Den, Mikey from The Goonies game, and Kong from King Kong 2 game.

Its gameplay is more of Castlevania in terms of platforming. It also has a vertical shooting stage featuring TwinBee and Gradius.