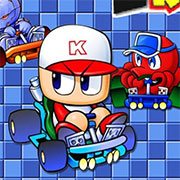 Konami Krazy Racers is a go kart racing game with cartoon characters. Start at the starting line with 7 computer racers and become the first one to cross the finish line.

Konami Krazy Racers features a total of 12 characters, each with unique features, including weight, speed and acceleration.

Use the Save button to download the save code of Konami Krazy Racers to your computer. Use the Upload button to select the save code from your PC to resume where you left off.