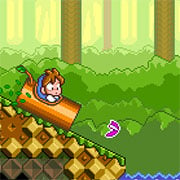 A complete English translation of DoReMi Fantasy: Milon no DokiDoki Daibouken from Japanese to English by Jonny of RPGONE.

DoReMi Fantasy: Milon’s Quest is action platformer game release for Super Nintendo back in 1996. But it was only playable in Japanese. Now experience this amazing game in English translation.

Story:
One day music disappeared from the village of Piccolo. Then, a demon called Amon appeared and kidnaps the fairy Alis.

Play as Milon, the main protagonist, armed with his bubble shooter gun as his only weapon, join him on his quest to rescue his kidnapped friend. Along the way, he’ll need to retrieve the five stolen musical instruments by defeating Amon’s strongest minions. Only Milon can save Alis and bring music back to Piccolo forest!

Adventure in the Otaku Galaxy