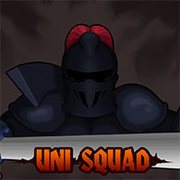 Hire and assemble the strongest squad of humans to fight strongest creatures from all his universe. Bored of eternal monotony, the God of time started his own little game to toy with us.

Start with a fearsome knight battling hordes of zombies, ghosts and necromancers inside the Silent Graveyard.
Soon a soldier, mage and skeleton will join your group of heroes to clear a city, beach and dark forest filled with evil creatures from every corner of the universe.

Slowly accumulate money and strategically manage between upgrades and unlock to gain the upper hand.

-Beat 35 waves of enemies from 15 different areas to complete campaign mode.
-Gold coins are earned by destroying enemies and can be used to summon new heroes and unlock new units and levels.
-Hire heroes by pressing a hire bellow the battlefield.
-Heroes positions can be changed/swapped by dragging their respective button (useful late game)
-You can check units stats by clicking on their button.
-Every 5 level ups by any hero you get a free upgrade for that unit. You first need to select the unit and then pick one of two available upgrades.
-Reaching level 10 of any hero lets you pick your first ability.
-Abilities have cooldowns and can be activated on the panel between the battlefield and the heroes buttons.
-On the map screen or in-between battles you can go to the unlock section where you spend gold coins to unlock new heroes and areas.
-New game modes will be unlocked after completing your first playthrough.