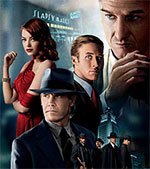 You got the stones to wage war against the mob in the official Gangster Squad game: Tough Justice? Shotguns, Tommy guns, rifles, grenades, Molotovs – the bloody battle for LA begins now! Gangster Squad, in cinemas January 10.

Use WASD or arrow keys and amouse to aim. Space for grenades
Take out all the enemies to complete a wave. There are 15 waves total