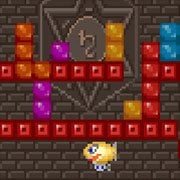 Puzzled is a puzzle game similar to Tetris, but instead of clearing lines, the player’s goal is to clear a path for their balloon to travel upwards. Every time blocks are cleared, a meter is slightly filled. When the meter is filled one third or higher, the player can unleash the Lightning Ball, or L-Ball, to automatically clear blocks around them in a Breakout-like fashion.

There were once two villages located right next to each other. One village was full of men, and the other full of women. The two villages didn’t get along and were always fighting, so the gods built a tower and wall between them to stop the conflict. However, this caused even more problems for everyone, because the tower blocked all the sunlight to both villages. The village of men sent out a boy and the village of women sent out a girl to travel in hot air balloons to the top of the tower to ask the sun god to remove the barrier.