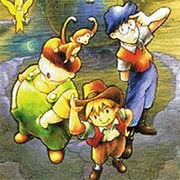 Classic nintendo RPG games that was only released in Japan, Mouhitotsu no Takarajima.

Control three boys each with their own skills.

Dion – (in red and brown, wearing the cowboy hat in the middle; age 12) – He may be short, but he’s a spirited little guy. He would be a fast runner and a good pitcher. (He would probably be the all-around character of the trio and in this case, would be good with throws and be the fastest of the three.) His small size allows him to get opponents off guard, due to his speed and all. Putting him at the head of the team will make them move quite faster.

Jack – (in blue and red, wearing the glasses; age 12) – He is the smartest of the three. He’s good with his hands. He likes to build things and work with machines. He’s a good jumper. He’s taller than the others, which comes in handy if the player(s) need(s) to jump high.

Max – (in green, with the monkey on his head; age 12) – He is the largest and strongest of the three. He likes to eat, but also likes to play soccer and swim. He is also a good boxer. (Not trying to refer to Little Mac; he’s just the strongest of the three. And boxing seems to be a hobby for him.) He also can lift up heavy objects. This allows him to move the fastest of all three when carrying something like a Crate or Barrel. (Not as fast as Donkey Kong, but still fast enough.)