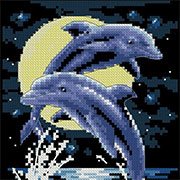 Ecco is older, stronger and engulfed by dangers! The evil Vortex has shattered the mystical Asterite.

Ecco and Trellia, a beautiful dolphin of the future, cross 100 million years of time to save the dolphins and all life on Earth!

Ecco morphs! Charge a metal sphere to become a shark with all its fighting power! Change into a seagull and fly! Safely swim past dangers as a jellyfish! Over 40 levels of spectacular aquatic adventure, with password save. Five levels of challenging 3-D travel, through the vast waters of the open ocean!

Gameplay:
The Tides of Time maintains the same gameplay as its predecessor. Ecco’s main attack is to ram into enemies at high speeds, while his sonar is used to communicate with other cetaceans and interact with certain objects such as crystal Glyphs, as well as bring up a map of the area through echolocation. By combining his charge and sonar, Ecco can attack enemies from a distance. As a mammal, Ecco is also required to surface for air at regular intervals.

New puzzles include following other dolphins through an underwater maze and a “scavenger hunt” in which Ecco must collect the Asterite’s missing globes. Two new power-ups were also introduced. The first is the “Pulsar”, which grants Ecco the ability to fire a multi-directional sonar attack at enemies for the duration of the stage. The second is the “Metasphere”, which transforms Ecco into different animals. The transformations are level-specific and include a seagull, a jellyfish, a shark, a school of fish, and a Vortex drone.

Some stages use a pseudo-3D effect. In these stages, Ecco must swim through moving rings while avoiding or attacking enemies. The player is forced to restart if Ecco misses too many rings or takes too much damage. (Wikipedia)