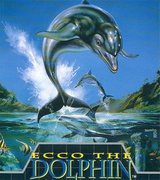 Join Ecco, the Dolphin, as he travel across the ocean floor discovering new adventures.

Attacking enemies is accomplished by making Ecco ram into them at high speeds. Swimming can be made progressively faster by tapping a certain button, and the speed can be maintained by holding it down. Players can perform a purely aesthetic spin in the air when jumping out of the water.

Two features of the game play on actual dolphin habits; one button causes Ecco to sing, allowing him to speak with other cetaceans and interact with certain objects. The same button is used for echolocation; holding it down causes the song to return, generating a map of the area. Several levels contain enormous crystals called glyphs, which respond in different ways if Ecco touches or sings to them. Some block paths, and a “Key-Glyph” must be found in such cases to pass. Others give information, and a few in later levels replenish health/air and give Ecco temporary invulnerability.

Additionally, Ecco, being a mammal, must surface periodically for air, or else find an air vent. If the “air meter” runs out, Ecco loses health rapidly, represented as drowning. His health is measured by a separate meter; it is depleted by enemies or when his air meter runs out, and it is recharged by eating fish, “singing” to clams, or, later in the game, singing to special statues or crystals called “glyphs”. Ecco’s song can be optionally upgraded at two points in the game: one upgrade allows Ecco’s song to be used in combination with a charge as a long-range weapon, and the other temporarily disorients sharks and makes minor enemies freeze temporarily. Touching any enemy by any means other than an attack causes Ecco to sustain damage. The enemies range from seahorses to giant octopodes.