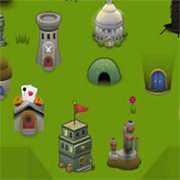 Arcalona is a base building role playing game. Build up your base using resources and different buildings to increase your islands size while going on adventures with your 3 mighty heroes to level them up and kill monsters! You have access to a skill tree, item equipping system and more to help you defeat the enemies!

features a spell tree, attributes system, weapon equipping system and over 36 different enemies to fight your way through!

Arcalona used to be a peaceful place, but it is all about to change when a meteor from the depth of the star hurled toward this peaceful planet. Upon the asteroid were new alien lifeform. The meteor impact split the world into separate islands, and spreading the beast near and far.

Arcalona was developed by armor games.

Leila And The Magic Ball