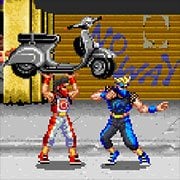 Zero Team U.S.A. is a 2D side-scrolling Japanese superhero-themed beat ’em-up game that puts the player in the shoes of either the male fighters Ace, Speed and Big O or the female fighter Spin. The team is pursuing the kidnappers of women.

Each fighter has their own set of moves that include hand to hand moves, kicks and special moves. Along the way, various items like barrels, scooters and crates can be picked up and thrown at the enemies. It is also possible to use weapons like spears and bazookas dropped by enemies and use these against them. Items to replenish health and valuables to increase your score can also be found. Enemies include hand to hand fighters, ninjas and various bosses. The game can be played solo or with up to three friends.