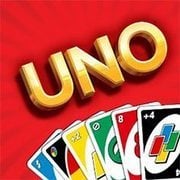 To begin, click the Medium link under the picture at left. This opens the game in a pop-up window.

UNO is a classic, with millions of sets sold over the years. Like most card games, UNO trains concentration, memory, and reaction time.

The object of UNO is to get rid of all your cards before the other players get rid of theirs. You get rid of cards from your hand by discarding cards that match the top card in the Discard pile in the center of the table.

The game is called “UNO” (which means “one” in Spanish) because when you get down to only one card in your hand you are supposed to shout the word “UNO”. If you forget to say UNO, you are penalized by having to draw two more cards from the pile. Of course, it’s rather silly to yell UNO at a computer, so in this UNO online card game you need to quickly press the red UNO button instead (see below).

The game keeps track of your score during each round. A Winners page displays when each round is over. UNO is a really fun game. It’s even more enjoyable when you play against real people with real UNO cards. I own UNO and have played it with family and friends for years.