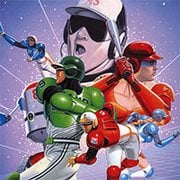 Super Baseball 2020 is a futuristic baseball video game. By the year 2020, the game of baseball will be a highly modified version of what it is today.  Humans and robots compete together in the updated national pastime. It’s common to see players use a Rocket Pack to shoot 50 feet in the air to take away a home run, and the pitchers throw unbelievable 200 mph curveballs! Hits, great plays, and ending an inning will earn you money, which can be used to upgrade your robots or improve your human players’ attributes. There are two world-class leagues to play in, along with 12 different teams to choose from. You can track your team’s stats, save your progress through the season, and take on a friend in the Two-Player mode. With Super Baseball 2020, you’ll wonder how anyone could watch baseball before!

Apart from the futuristic characters, the field has also been revamped and redesigned for the future. There is only one stadium in this game, known as Cyber Egg Stadium. A ball hit over the outfield fence is no longer a home run unless it is hit directly over the fence in center field. The other areas of the outfield stands are covered with a protective glass that will cause the ball to bounce off of it and bounce back in play onto the field. The ball hitting this zone always comes back into the field but gives the batter enough time to take a base or two. However, slower runners can sometimes be thrown out at first base even if the ball is hit over the outfield fence.

The reason the home run zone was reduced is because the hitters are far more powerful and have the ability to blast the ball tremendously far. Only the most powerful hitters can have the accuracy and strength to hit the ball far enough to get a home run. The foul zone has also been reduced. It is now shorter and only encompasses the area directly behind first base through third base. Weaker batters can often get a hit by swinging early or late at the ball, causing it to just barely make the fair zone in what would otherwise be the foul zone in normal baseball.

Beyond the futuristic new stadium, a powerup system is also available to both the offensive and defensive team. At any time before the ball is pitched, either player can call up a menu of powerups for their pitcher, batter, or fielder. These upgrades come in three progressive strengths. Human players can also be traded for robots which stay more accurate over a longer time on the mound, but can explode and become useless after heavy use. Powerups are paid for with money that is awarded the player for good play, such as hitting the ball and scoring runs. 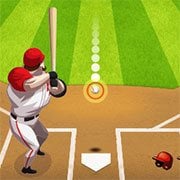 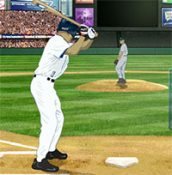 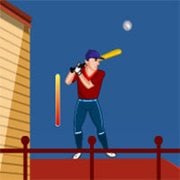 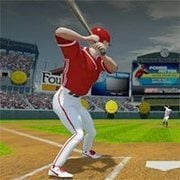 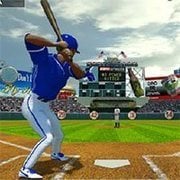 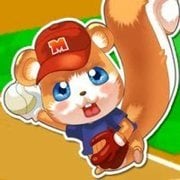