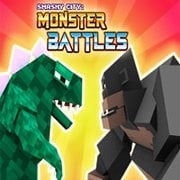 Smashy City 2: Monster Battle is a sequel build to the popular online hit Smashy City. Hatch your own monster and take them to battle other monsters in the big city. Take them on an adventure in epic battle tournaments!

Apply different skills of your monster and win. Take advantage of each monster’s strengths and weakness to win. Cool Rampage cutscenes to destroy everything in your path.

Include huge unicorns, godzilla, king kong, mantises, golems, and other monster or mythic creatures will take part in ultimate battles.