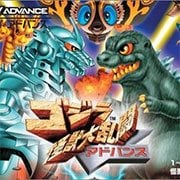 Meteor X appears over Tokyo 2 and starts projecting magnetic waves which causes neurological damage to several monsters, causing them to go berserk. The monsters begin to attack Earth and its neighboring planets (led by Mecha-King Ghidorah), however, one monster remains unaffected by the waves and it’s up to it to stop the others and destroy Meteor X.

Use the Save button to download the save code of Godzilla Domination to your computer. Use the Upload button to select the save code from your PC to resume where you left off.

Click on the “keyboard” icon at the bottom of game to see default controllers that correspond to your keyboard.