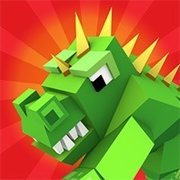 Take control of giant monsters on the loose in a heavy populated urban city. Smash, stomp, and punch down building throughout the city. Skyscrapers stands no chance against you.

The United states military had deployed the police officers, SWAT, and the Army to try and stop you. But all you want to do cause maximum destruction!

Battle against whatever tech high military gears they sent your way from tanks to helicopters and more!

Take control of a giant Ape, Lizard, Wolf, Spider…even a Penguin and a Giant Bunny! Take your highest scores to the leaderboards and beat your friends!

How much City can you SMASH UP?!