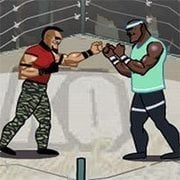 Fight in a street brawl to play a single match or choose to fight in a gang war where you will fight rival gang members and build up your character. Smash boxing features 20 fighters belonging to four different gangs. Each fighter has unique speed, strength, and stamina attributes which can be built up in gang war mode.

Boxing Legends of the Ring