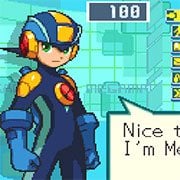 Rockman EXE 4.5: Real Operation is an action role-playing video game for the Gameboy Advance. The game was released in Japan only. Now is completely translated into English.

Translation:
This patch fully translates Rockman EXE4.5: Real Operation, also known as Mega Man Battle Network 4.5, into English. All text and images in the game are translated, a number of bugs in the original game have been fixed, and some new features have been added. In addition, this translation patch is able to connect with the English versions of Mega Man Battle Network 4.

This translation is a joint effort by members from Mega Man Battle Network fan community, The Rockman EXE Zone. The game has been localized faithfully to the other official Capcom localizations of the Mega Man Battle Network games at the time. Two versions of the patch are available: a North American version and a European version, featuring different title screens and some minor differences like date/time formats.

Use the Save button to download the save code of Rockman EXE 4.5: Real Operation to your computer. Use the Upload button to select the save code from your PC to resume where you left off.