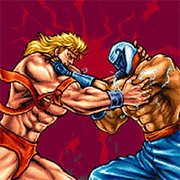 Step into Ring of Destruction, the most liked Capcom fighting games of the era, in which the player has to win two rounds to claim victory.

Its control system included a five-button layout consisted of punch and kick buttons of weak and heavy strengths and a grapple button.

he wrestlers of the Capcom Wrestling Association gather once again, but this time the Blood Wrestling Association has joined in to wrestle with the CWA for the championship. Victor Ortega, the previous Muscle Bomber champion, as well as owner of the CWA, had left because he couldn’t find anyone strong enough to give him a decent challenge. Now he’s back, and is the guy to beat to earn the championship.