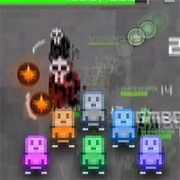 Raid Encounters is a remake of the classic pinball with a lot of modern RPG twist, such as, experience point, loot drops, skill progression, Raid Bosses, Monsters, Dungeons, DPS ratings, a Combo System, and more. Spend Skill points to increase your raid combat power and stats. There are six unique avatars available giving you special abilities that are suited for each challenge you’ll face.

Hit Monsters with your Avatar while keeping your Raid Party safe by moving them around with your mouse by dragging them or with your Arrow keys or WASD. Select the right Avatar for the job with your Mousewheel or by clicking one from the left side bar. Build up Combo Points to increase Damage. When you earn experience (XP), spend skill points, and get bonuses in-game, these affect the entire party as a whole. They level up together and share the same HP pool.

Power
The sole boost given by this skill is how hard your avatar hits when it makes contact with a monster or raid boss.
Speed
This attribute dictates how often you can shoot, how fast your avatar travels throughout the dungeon, and your evade rate.
Endurance
This skill raises your maximum health points, the amount of health regenerated per second, and your base armor level.
Luck
This attribute increases the chance of finding loot, rare monsters, and inflicting a critical strike on an enemy.

Acid Avatar
The Acid Avatar is a great, all-purpose weapon that can be used in nearly any situation. Even though different Monsters and Raid Bosses have varying levels of armor and defense against Acid damage, this Avatar is unique in the fact that each time it hits an enemy it drops their base armor level down a few points, making all of your Avatars hit a little harder. If you run into a Monster or Raid Boss with a lot of armor or HP, you can slowly dissolve it away by hitting them a few times with acid.

Fire Avatar
The Fire Avatar is a weapon purely dedicated to damage. Its initial hits aren’t as strong as other Avatars, but it makes up for that with a devastating Damage-Over-Time (DoT) effect that burns targets for 10 seconds after they’re initially hit. If you have extra time to spare and need to focus your DPS onto other enemies, this is a great way to do it.

Ice Avatar
The Ice Avatar is designed to make your life easier, not only by hurting enemies with ice damage, but also slowing them down dramatically when your Avatar connects with them. If you’re dealing with enemies who chase your Raid Party around, this is a great way to slow them down so you can snipe them from afar or handle a Raid Boss easier.

Life Avatar
The Life Avatar deals a little bit of damage to most enemies, with an emphasis on Undead targets. The special feature of this avatar is its ability to heal your Raid Party for a portion of the damage it deals to Monsters or Raid Bosses it hits. If you can’t wait for a Health Boost Power-up to appear, using the Life Avatar is a good way to stay alive.

Plague Avatar
The Plague Avatar is a lethal weapon, used to deal great harm to huge swarms of mobs. Its initial hits are relatively weak, but they make up for the fact with the disease they spread. When you hit a Monster with this Avatar, it will become infected with a lethal disease which acts as a DoT effect for a brief amount of time. Right before the DoT effect expires, the Monster will become contagious and any other Monster it’s making contact with will contract the DoT for the same amount of time. Just like the initial carrion of the disease, it too will become contagious before the DoT expires.

The Pinball of Oz