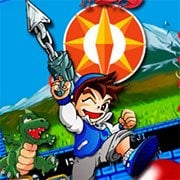 Go round-the-world in Pang! 3 to destroy bouncing balloons that are terrorizing the world.

The object of the game is to use a gun to pop bubbles that bounce around the screen. There are two different modes: panic mode and arcade mode. Similarly to Asteroids, when a player pops a bubble, it splits into two smaller bubbles. Sufficiently small bubbles simply vaporize when popped. Occasionally, monsters walk or fly on to the screen. When the player character touches a monster, they die. Monsters can also pop bubbles. Although the arcade game and the PlayStation version included in Buster Bros. Collection allow two players to play simultaneously, the Super NES version only has one player mode. Powerups are found by popping certain bubbles, shooting boxes, or shooting certain unmarked spots in the level. The gun powerups cannot be used in conjunction with each other.