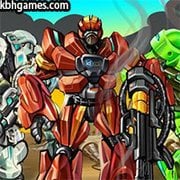 THe Mega Mechs robots are back again in Mega Mechs 2 to save the world from destruction by the hands of evil alien robots. The time period is based on 10 years after the first Mega Mechs. Build powerful giant robots and fight in epic battles to save humanity.

Will you be able to save the world and send the alien back to where they came?