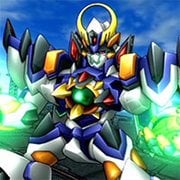 A retro tactical turn based strategy game, where you operate a mobile suit gundam to defend earth from invaders.

Stoyline:
It is two hundred years after the beginning of the “Space Era”, a time period when civilization began expanding into space. However, by the start of the 21st century, two meteors struck and destroyed much of the Earth, sending humanity into chaos. By year 179 of the Space Era, secret technology, dubbed Extra-Over Technology, or EOT, was discovered by the Earth Federal Government within a third meteor that had hit Earth at the Marquesas Islands in the South Pacific. Dr. Bian Zoldark, while investigating the meteor, also found out that the creators of the Extra-Over Technology were heading to Earth to reclaim it. In order to defend earth, the government starts to develop a group of humanoid mecha, known as Personal Troopers.

The alien race that created Extra-Over Technology, called the Aerogaters by the Earth Federal Government, initially attacks an Earth ship sent out to investigate their presence in the far reaches of the solar system. This initial skirmish ends in a defeat for the Aerogaters, prompting them to sue for negotiations with the Earth Federation Army. Talks are arranged to take place at a secret facility in Antarctica, but the talks are targeted by a rogue faction called the Divine Crusaders.

The Divine Crusaders destroys the Aerogater delegation, then turn on the Federation forces. Bian Zoldark, revealing himself to be the leader of the Divine Crusaders, announces the existence of the Aerogaters to the world and rebel against the Earth Government. As Earth spins into civil war, a new Aerogater force is on the move, seeking to reclaim their lost technology… (Wiki)

Gameplay
Super Robot Taisen Original Generation offers the player a choice to play the game from the perspective of either two male protagonists, both of whom find themselves fighting the Divine Crusaders and the Aerogaters from different fronts. While both routes share similarities, each character has his own unique missions to follow, as well as meeting different people and piloting different mechs in their respective scenarios. Regardless of who the player chooses, both protagonists and their parties will eventually join up to form one large cast, with brief branching stages, based on the character chosen in the beginning of the game.

As a first in the Super Robot Wars franchise, Original Generation allows the player to equip or remove weapons on mechs. For example, the Plasma Saber equipped on the Weiss Ritter can be removed and placed on the R-1 for its pilot to utilize during sorties. However, this unique system is only available on mechs that are of the real-type, while super robots are not capable of switching weapons but you can still equip a weapon that decreases movement, armor, weapon attack etc. The game also allows the use of customizing playable pilots, through a set of pilot skills, bought by Pilot Points, received from defeating enemy units. These Pilot Points can also upgrade their stats that determine how well he/she performs in battle as well as their terrain adaptivity. (Wiki)

Use the Save button to download the save code of Super Robot Taisen, Original Generation to your computer. Use the Upload button to select the save code from your PC to resume where you left off.