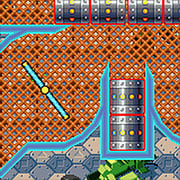 The story begins when Kururin’s brothers and sisters go missing, and it is up to him to find them. Kururin is initially unsure that he is up to the task because he has never left his home world before. Being the adventurous and helpful fellow he is, Kururin agrees to rescue his lost family. Teacher Hare trains Kururin in the art of controlling the Helirin, a stick-shaped helicopter that has a slow-spinning propeller. Piloting the Helirin through the different worlds will be a difficult task, but using Teacher Hare’s valuable lessons, Kururin bravely sets out on his adventure to rescue his lost family.

Gameplay:
The player controls a slowly spinning stick called the Helirin, or the Helicopter in the European localization, and must maneuver it through a series of mazes without touching the walls. The player controls the direction and speed of movement (there are 3 levels of speed), but the task is made difficult as the stick rotates continuously. The Helirin can move faster by holding down any of the two face buttons, and even faster by holding down both. There are bonuses to collect, record times to beat, and a gold star for completing the level without any accidents. The game also features multiplayer support, which enables four players to participate in the action using a single cartridge.

Use the Save button to download the save code of Kurukuru Kururin to your computer. Use the Upload button to select the save code from your PC to resume where you left off.