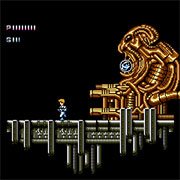 Journey to Silius, known in Japan as Rough World is a side-scrolling run and gun video game developed and published by Sunsoft in 1990

Now enjoy this game on the web.

In the year 0373 of the new space age calendar, overpopulation of Earth has led to increased demand for emigration to space colonies. Jay McCray, the son of a scientist responsible for the development of space colony #428 in the Silius Solar System (SSS), prepares to move there in order to follow in his father’s footsteps. However, the space station is obliterated in an explosion, killing the entire research team and destroying all data onboard.

The player controls Jay McCray, as he goes on a mission to defeat the terrorist group responsible for his father’s death. There are five stages, consisting of the ruins of a space colony, an underground concourse, the enemy’s hideout, a flying spaceship, and a factory. The player must fight his way through an assortment of robotic enemies and security systems in order to reach the end of each stage and fight the stage’s boss.

The controls follow the standard conventions of other side-scrolling action games for the NES. The character can lie down, but he can only aim his gun left or right. In addition to the default handgun weapon, the player can switch to one of five additional weapons that can be procured throughout the course of the game – which are a shotgun, a machine gun, a homing gun, a laser rifle, and a grenade launcher. Each of these special weapons consumes the player’s Gun Energy gauge and once it runs out, the player would automatically revert to the default handgun. The player can replenish Jay’s health and ammo by retrieving energy capsules dropped by defeated enemies. After the fifth and final stage is completed, the credits are shown, and the player would restart the game on the first stage.

Journey to the East