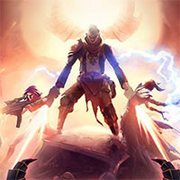 Enter the  post-apocalyptic world of awesome MMO RPG. Battle, survive, and strive for dominance in this barren wasteland. Assemble your group of soldiers  as you do battle in tactical real-time. Each character have their own unique skills and special abilities. Be smart and utilize each unit effectively. Build the perfect squad, train them to become an unstoppable force.

Will you be able to conquer the darkness?

FEATURES:
★ COLLECT all Infernals for flawless dominance: Infernals are the ultimate warlords who dominate the battlefield. Convince them to join your squad and end the reign of the demon lord with their support.
★ ENGAGE in tactical real-time battle: Find the right strategy and build the perfect team.
★ EXPLORE the corrupted wasteland of the Infernals: Delve into a grim fantasy world and discover the story behind those hellish events.
★ ASSEMBLE an unbeatable team of powerful heroes: Summon hundreds of unique characters, collect an unstoppable squad of heroes, and test their survival skills in action.
★ UPGRADE your heroes to perfection: Equip them with Relics like amulets and masks to unleash their powers.
★ COMPETE against the best players in the Fighting Pit: Strive for dominance against thousands of other players worldwide in challenging PvP modes in this MMO. Join guilds to unite your strengths. Only the fittest will survive in the arena.
★ ENJOY stunning 3D characters and breathtaking effects