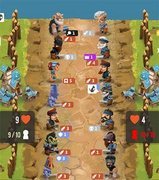 Highgrounds is an original multiplayer CCG with over 200 collectible characters. Inspired by games like League of Legends and Team Fortress, we have tried to make it a game of skill above all else. Complete the single player campaign to amass a powerful army, then compete in multiplayer matches to prove your worth (and win more units). But be warned: this is a deeply strategic game, and more experienced players will likely teach you a hard lesson or three!

You can play Highgrounds both in real-time or asynchronously (if you like to play at a slow pace and/or juggle several games). Defeat your opponents by outmaneuvering them on the battlefield. WHERE you put your units is as important as WHEN you summon them. Front row or back row? 1st position or 2nd position? A well-timed move can spell defeat for your enemy… or for you.

Participate each week in our free tournament and events. Each week you can earn new free units and gems which can be spent on booster packs.