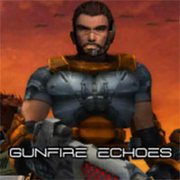 A mechanical alien race has invaded the earth and killed 3/4 of the Earth’s population! Defend the last of mankind against the invaders in Gunfire Echoes! Use your guns, turrets, and special abilities to prevent the enemy forces from destroying your base.

Gunfire Echoes is a shooter defense game where you take control of a commander of the last of Earth’s forces. After an advanced alien race invaded the Earth with their mechanized suits and obliterated most of Mankind, the remaining survivors grouped together and formed an organized militia. Now the enemies are advancing with the goal of mankind’s extinction. Lead the fight and defend your base in this awesome shooter game!