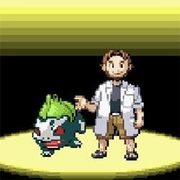 Pokemon Snakewood is a gift to pokemon lovers from another pokemon lover. This game is hacked by Cutlerine. A very good remake of Pokemon Ruby. Game story has been totally rewritten. In your adventures, you need to defeat 8 GYM Leaders and the League; prevent the Evil Team from making crimes.

You awake in what used to be Littleroot town, having no memory of how you got there or even who you really are. It soon becomes apparent however that something very big has happened while you were out: Hoenn has been invaded by an army of zombies.

Working with Prof. Birch, you set off to find your brother Landon and Birch’s daughter May, who have both gone missing in an attempt to find the source of the undead plague. At the same time, you try to uncover your past. On the way you face zombies, witches, demons and the enigmatic Taoist, Gleis, as well as the Four Horsemen of the Apocalypse, the Hoenn Internal Affairs Army, and, eventually, the architect of all this misery himself: Senex.

However, it isn’t nearly as dark as all that: there are also the cheerfully insane (and improbably numerous) Deadly Seven, the unruffled and cynical Army Recruiters Tina and Bruce, and a psychic dragon’s egg. Not to mention a special appearance from the Denjuu universe.

New scripts, new overworlds, new sprites – the usual
Exciting new areas, such as the hidden Meathouse, the maddening Island of Calm and the unexpected Hoenn University of Film
Several zombie versions of normal Pokémon, two of which are capturable
6 Denjuu
An indeterminate number of Fakemon (somewhere between 40 and 50), including a good number of hidden evolutions to existing Pokémon
New legendaries, some of which are very, very evil
7(?) Sinnoh Pokémon
5(?) Isshu (or Unova, depending on how much you care) Pokémon
Most Gyms have now been destroyed by zombies, and hence Badges are come by in somewhat unusual ways
A few type changes for Pokémon here and there.
A surprising pet shop run by a certain Count
A host of deceitful characters who will do anything to lie to you
An unusual and somewhat wandering storyline
An enormous number of references to books, films, manga, other hacks and other such things
A somewhat darker plot than usual
A slightly increased difficulty level

Include a lot of Fakemon inside the Pokedex.