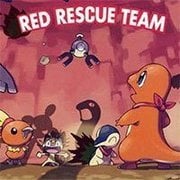 The player starts out as a human who turned into a Pokémon, which can be one of sixteen Pokémon (Bulbasaur, Squirtle, Charmander, Cyndaquil, Totodile, Chikorita, Treecko, Torchic, Mudkip, Pikachu, Eevee, Machop, Cubone, Psyduck, Meowth, and Skitty) and is determined by a personality quiz taken at the beginning of the game. The player chooses a partner Pokémon which is one of ten Pokémon (which excludes the last six stated above and the Pokémon of the same type). The game is mission-based with many jobs, which can be found on the bulletin board, requested by mail, or initiated through story events, and include rescuing Pokémon, delivering items, or escorting clients. If the player successfully completes a job, they receive a reward, and Rescue Points, which increase a team’s rank.

These jobs take part in dungeons, of which the layout is randomized.The objective is to either finish a job, or go through all the floors to find the exit. In the dungeon, there are wild Pokémon that battle with the player’s team. These battles are turn-based, and take place in the dungeon map.[1] Pokémon fight using the four moves they know, by using a standard ‘A button’ attack, or throwing rocks and other items. While going through the dungeon, the player gets hungry, and has to eat food either found in the dungeon, or bought in advance.

The player will fail if either the main character or partner are defeated. However, subliminary allies can be lost, at which point they will return to the base.

Use the Save button to download the save code of Mystery Dungeon: Red Rescue Team to your computer. Use the Upload button to select the save code from your PC to resume where you left off.