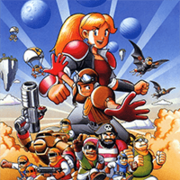 The galaxy’s top bounty hunters Roddy and Cathy are sent to put a stop to a colony of Galactic Pirates called the Klaptons who threaten and plunder the cosmos. Four high members of the colony have taken control of four elemental planets. Big rewards are offered for the captures of Sly, Misty, Mr. Bigman and Dr. Burn. The top hunters battle their forces and destroy the bosses’ war machines but they all get away. In the Last Hunt, Roddy and Cathy will have to battle in Captain Klapton’s Mothership, defeat the four bosses again and take care of the captain once and for all.

The player, as Roddy (the second player plays as Cathy), must navigate through the stages, collecting items, killing enemies, and defeating a boss at the end of each area. The characters can also execute special moves, done by moving the joystick in certain directions and pressing the attack button, similar to Street Fighter and King of Fighters fame.