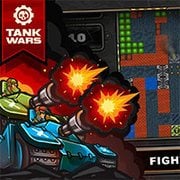 Tanks Wars 2 is HD version of the classic tank shooter, your goal is to defend your base from attack. Play up to 2 player. So don’t be shy to ask your friends to join along and win together. With more than 120 levels will be having a blast for a while. Each level is a little bit more difficult than the previous. So learn your mistake and learn new tricks and strategy. You’ll come face to face with dangerous mini-bosses. Try to use walls and terrains to your advantage and outsmart the enemy.

How will you do battle in Tanks Wars 2?