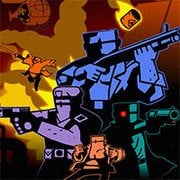 Superfighters 2 Ultimate is the amazing continuation of the action shooting platformer of Superfighters. New maps and new characters. Step into the highly destructible arenas. The goal is simple is the same, kill your opponent before he kill you. You’ll control a little pixelated character that can use  shotguns, machine guns and grenades, and cool power ups.

You have the option to play against the AI CPU or in 2 player mode with your a friend. In stage mode,  you will gradually meet more powerful enemies. Finishing all stages on normal difficulty unlocks a secret player skin.  In survival mode, in which you have only one goal: keep fighting and stay alive as long as possible.

Press Esc to return to the menu. F12 or Alt + Enter to enter fullscreen (only in the downloadable .exe version)

NOTE: Some keyboards will cause problems in two-player mode due to the limited number of keys that can be pressed at once. This is known as keyboard ghosting. Try remapping the controls in the Setup menu, and use the numpad for one player if possible. 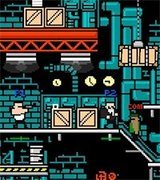