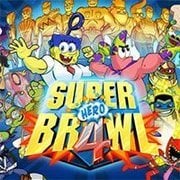 Brawl is back again in Nick Super Brawl 4!

It is basically super smash flash 2 with nickelodeon characters Enjoy.

But this time we’re going bigger and better than ever! Check out Super Brawl 4, Nickelodeon’s newest free online fighting game. Choose SpongeBob SquarePants’ Sponge Out of Water super hero, Invincibubble, or Patrick Star’s Mr. Superawesomeness to fight it out! Or, you can mix it up with the Power Rangers from Power Rangers Dino Charge, the Teenage Mutant Ninja Turtles or Sanjay and Craig. More of a Legend of Korra fan? We’ve got you covered. Don’t forget about Harvey, Fee and Foo from Harvey Beaks, and SwaySway and BuhDuece from the Breadwinners. No matter which team you choose in this free online action game, you’re sure to get a battle for the ages. In the end, it’s up to you to determine who will emerge victorious!.

Watch this characters on Nickelodeon.

Please be patient while it loads, because file size is huge.

Sometimes you may  have difficulty with loading the game, simply refreshing the page in most case fix the problem.