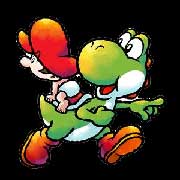 To reunite baby Mario with his brother Luigi, who has been kidnapped by Kamek, the player controls Yoshi, a friendly dinosaur, through 48 levels while carrying Baby Mario.

Gameplay:
Yoshi’s Island is a 2D side-scrolling platform game. Its story begins as a Magikoopa of the Koopalings attacks a stork delivering baby brothers Mario and Luigi. They succeed in kidnapping Baby Luigi, but Baby Mario falls out of the sky and onto the back of Yoshi, the titular friendly dinosaur and player-character of the single-player game. While the player-controlled Mario and rode Yoshi in previous series games, in Yoshi’s Island, the player controls one of many Yoshis, which take turns traveling through 48 levels across six worlds to rescue Baby Luigi and reunite the brothers. In the Super Mario series platform game tradition, the player controls Yoshi with a two-button run and jump control scheme. The player navigates between platforms and atop some foes en route to the end of the increasingly difficult levels. Yoshi also collects coins to earn extra lives and retains his long tongue from Super Mario World. The game centers more on “puzzle-solving and item-collecting” than other platformers, with hidden flowers and red coins to find. Levels include mines, ski jumps, and “the requisite fiery dungeons”. Every fourth level (two in each world) is a boss fight against a large version of a previous foe.

Luigi and the Island of Mystery