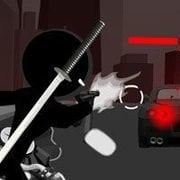 Vinnie and his team are confronted with a vengeful clan which will bring them to track the culprit or culprits down. But things don’t turn out as planned, when suddenly Vinnie finds himself in the worst place possible! An action-paced game that features classic shoot outs, sniping, close combats and intense car chases. The game even has new weapons and introduces new combat moves.

se mouse to move and interact Left click to Shoot Press W or S to Cover, Stand or Aim Press A or D to move left or right Press 1 to 9 to switch weapons Press spacebar to reload Press P to pause the game