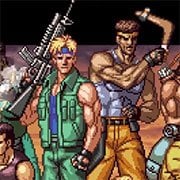 The shock trooper military squadron returns, this time they have to take down a new terrorist organization known as DIO.

Shock Troopers (ショックトルーパーズ, Shokku Torūpāzu) is a run and gun arcade game developed by Saurus and published by SNK in 1997 for the Neo-Geo arcade and home platform. Gameplay involves taking command of one or three soldiers in an eight-way shooter. A second game in the series, Shock Troopers: 2nd Squad, followed up in 1998.

Story:
The Bloody Scorpions terrorist group have kidnapped a scientist and his granddaughter Cecilia in order to gain the powerful drug, Alpha-301, which converts normal people into superhuman soldiers. A special team composed of eight soldiers from different countries must fight through their ranks in order to get to their leader and save the scientist’s granddaughter and the world. (The sequel, Shock Troopers: 2nd Squad, has a completely unrelated story and different characters.)