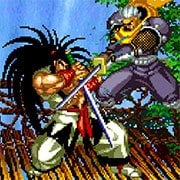 Haohmaru’s role in the story was diminished, in favor of the new main character, and the overall story is smaller in scope. The returning characters from the previous game are:

New warriors added to the series included the following: