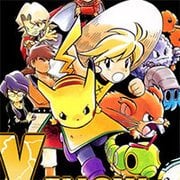 Storyline: 2 Years Ago……..An epic fight broke out between Red and Elite Four, Bruno. The Elite Four punished, beat, and crushed Red from Pallet Town but, one Pokemon managed to escape, Pikachu. Come and join Yellow’s team of amazing Pokemon through challenges she had to face through out the manga trying to one day return Pikachu to his rightful owner, Red.

Features:
-Play as Yellow
-Capture all the Pokemon she obtains in the manga
-Red, Green, and Blue will make there appearance like in the manga
-You don’t need to worry about Gyms
-Yellow’s Pokemon will be forced evolved throughout the hack
-You will be able to ride Doduo and Dodrio(Once Evolved)

Use the Save button to download the save code of Pokemon Adventures Yellow Chapter to your computer. Use the Upload button to select the save code from your PC to resume where you left off.