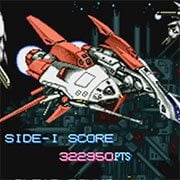 Pilot a spaceship in outer space to defend your space colony from alien invasion.

Play alone with only one ship or ask a friend to join you in two player co-op mode.

The ship is called Raiga, it has the ability to spin around to attack enemies from behind. Power-ups can be obtained by destroying container ships. The craft’s weapons include the Shotgun, Ion launcher, Vertical, Homing Missiles and Bomb attacks along with items such as Speed Ups, Shields and Extends.