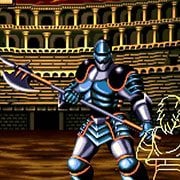 The game allowed cooperative gameplay with up to two players on the same screen. As only the player characters’ silhouettes are visible on the screen.

Gameplay:
Crossed Swords requires correct timing and movement to progress. The basic rule for the game is to defend first before striking. The player wields both a weapon and shield and can strafe, as well as guard the upper or middle part of the body. Two different weapon strikes are available, a regular attack and a thrusting attack. Weapon-based magic can also be used. Multiple paths through the game are available and the player has an option to skip the first and second chapters freely