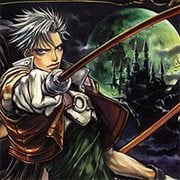 Castlevania: Circle of the Moon

Play as Nathan Graves as he traversed through the monster-filled castle as he searches for his kidnapped mentor. Nathan favorite weapon is his whip that he used to attack and defeat his enemies. But he is also skilled in other weapons such as, axe, cross, holy water, dagger and stopwatch—only one of which may be carried at any time by the player.

Taking place in 1830, Circle of the Moon is set in one of the fictional universes of the Castlevania series.

You’ll have to fight with Dracula, king of vampires, as the main boss. Play to figure out more about the storyline.

Use the Save button to download the save code of Castlevania: Circle of the Moon to your computer. Use the Upload button to select the save code from your PC to resume where you left off.

Castlevania HOD: Revenge of the Findesiecle

Looney Tunes: Back in Action