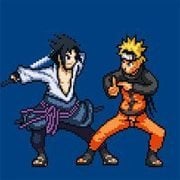 Do awesome battle between Heroes and Villains from Naruto and Bleach.

Bleach Vs Naruto 2.5 returns this time with Team Sasuke, called Taka, originally Hebi, is a team created by Sasuke Uchiha with the initial objective of locating Itachi Uchiha, and prevent anyone from interrupting his battle.

Team Sasuke include three team-mates, Suigetsu Hōzuki, Karin, and Jugo all available in Bleach Vs Naruto 2.5.

Jugo and Karin are added as playable characters and Suigetsu Hōzuki as supporting character.

On the Bleach side Soifon, commander-in-chief of the Onmitsukidō and the captain of the 2nd Division in the Gotei 13, also join the battle as a supporting character.

Play the latest version of Bleach Vs Naruto.

Bleach Vs Naruto 2.5 was developed by 5dplay.

Click on the flash game to make sure it’s selected. Then use WASD and J to select character.

One Piece VS Naruto 3