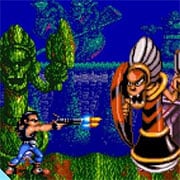 Story:
A criminal called Scrubby has escaped. He was imprisoned for trying to steal the Magic Pendulum – which brings toys to life. Relik, a cuckoo clock, guards the pendulum. Scrubby appears suddenly and steals the pendulum. A hero called Inguz, are called on to recover the pendulum before the toys’ magical world disappears.