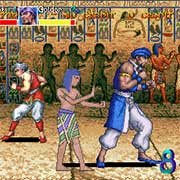 Arabian Fight is a scrolling beat ’em up video game.

Story:
The corrupt Sheikh Sazabiss has abducted Princess Lurana, and he is utilizing every unscrupulous means of power he has at his disposal to achieve his ultimate ambition of conquering the world. The quartet of valiant and fearless warriors bravely come face-to-face with Sazabiss. As they battle to save Lurana, the foursome, freely using magic, their most prized possession, the journey to the castle of Sazabiss to save the princess and the planet.

Gameplay:
The gameplay is very similar to many beat ’em up games of the generation, and to Sega’s other side-scrolling beat ’em ups Golden Axe and Streets of Rage, using three action buttons, one to punch, one to kick and one for a special attack, in this case, magic based, similar to Golden Axe special attacks. Characters can also throw their opponents, and items can be collected from chests, as well as some enemies, to give extra points, restore health and grant the character their special attack.

The game uses sprite scaling techniques to allow characters to move to the far back of the screen and give a feeling of perspective. The game also makes use of the foreground, something rarely done at this time, as characters perform special attacks very close to the screen, some so close that only their torso and head will fit; likewise enemies can jump from the foreground to fight (characters cannot be hit while in these animations).