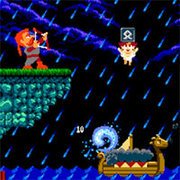 Viking have a tradition where they sent off their dead brethren in a fire burning sacred Ship Burial Ritual. It is believed that the fire facilitates the voyage to the realm of the dead..

This time you had been hired to perform this task. Help your fellow Vikings find their way to the afterlife, to Valhalla, the grand hall of Odin. This is a very important responsibility and a noble one. But it is not as easy as it sounds.

Shoot your flaming arrow at the burial ships as he sail into the horizon. The ghost of the departed will start to appear. You must avoid hitting those ghostly figures. Also you must protect them from other creatures coming to eat their souls.

Will you be able to defend them as they travel VALHALLA BOUND?

OBJECTIVE:
Light the boats on fire to release your viking brethren. Avoiding shooting their souls. Focus on attacking the monsters.

Make sure to turn off demo mode. Game starts out easy but get a lot harder.

Note: The “Demo On/Off” button on the upper-left hand corner of the main menu is used to enable/disable the tutorials.